Herman is cute, I admit! 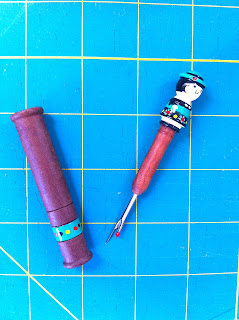 But he and I have a turbulent relationship!

Take, for example our recent run-in!

I am nearing the finish of my major EPP project....

but now known as "Nearly a Rainbow") 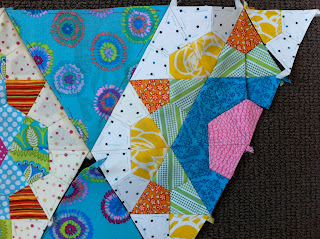 and was putting half blocks together with full ones,


I discovered that my half block wasn't really a half

Ugh! (I have had that problem before!) 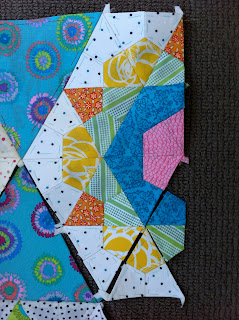 Needless to say Herman has being doing his job

Now onto the next three!

PS: A number of followers were wondering where I got Herman (named after my German grandfather).  My LQS, where I bought him has now closed down, so after some googling and research
I found an online store!
"Little Quilt Store" in Queensland, make them!
Go here to buy your very own Herman!

Nearly a rainbow is much more appropriate.

Cutest seam ripper ever! Hopefully you and Herman can take a break from each other. hehe

Oh dear, you give those tools names and they begin to think they can take over!

Nearly A Rainbow sounds great and looks great.
Hope there's not too much more seam ripping to happen!

Hee hee! I have a Herman! I am so sorry about the half block. Yikes! I hope Herman had his hands over his ears!

I think every sewist/quilter needs a beloved seam ripper. My favorite is a surgical seam ripper with a curve. I ruined mine by trying to clean thread off of the vacuum beater bar and have been desperately tryine to find a replacement. They are on back order, supposedly. glad you were able to fix your quilt.

Me and my seam ripper are best friends, but mine is not nearly as cute as yours. The quilt top is going to be stunning, and that was just the sort of Ooops I would make at the corner.

I like your Nearly a Rainbow. Hope the other halves behave! I so loathe having to use a seam ripper that I would never deign to name mine!!

OMG Herman comes from my neck of the woods. I didn't even know that shop existed. I'll have to pop on down there to check it out.I love my seam ripper but it's not nearly as cute as Herman.
Bummer about the half block, at least you worked it out on the first one and not until the last.

That Herman, he's pretty talented, and good at cleaning up those corners. Nice job!

I think I will invest in some kind of fancy ripper once I get my scrappytriplong finished!!

Your Nearly a Rainbow is more than nearly beautiful! The colors are great against those dotty backgrounds. EPP is a bit slow-going for my taste, so I don't do it anymore. Do you change thread colors for every piece, as I was taught to do? And make teeny, close-together hand-stitches?

Nearly a Rainbow is such a great name, its great to see it coming together. Funny about the half hexie... how annoying. Thanks for the link, I've wondered where I could get one of those cute little unpickers, I sure do need one.

Adrianne @ On the Windy Side said...

Nearly a Rainbow is looking great! I love that you named your seam ripper - I think I need to get something cute like yours. Then maybe I will have better feelings towards it...